Celebrating the end of the race! (Photo by Hailey Coake) 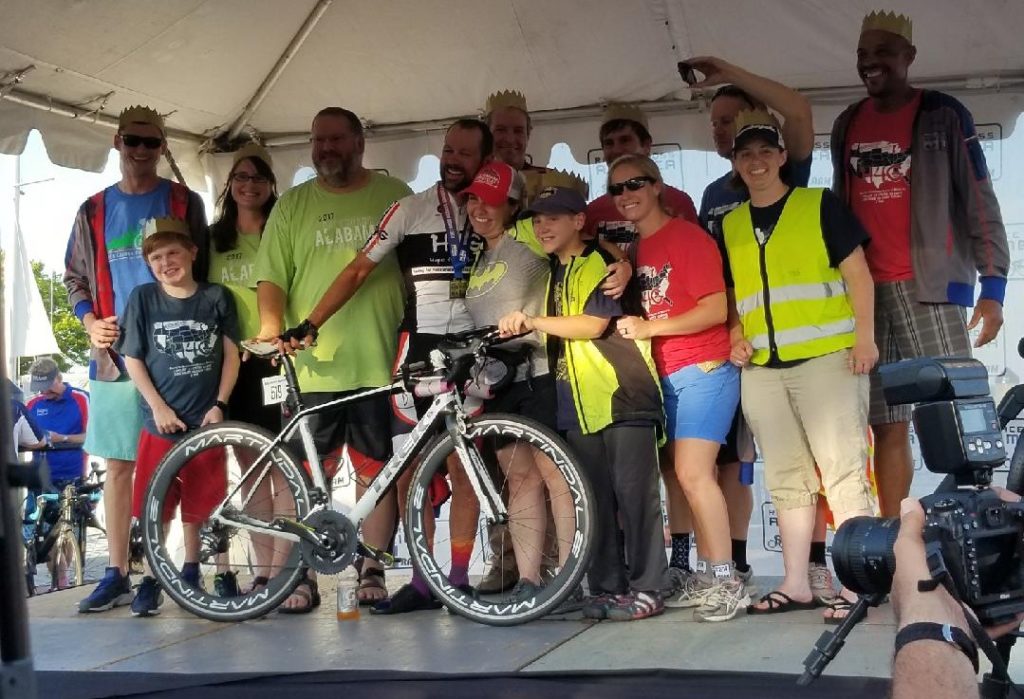 Given that average speed, I would have broken the 10 day barrier on a typical 3000 mile route, but a particularly long detour this year added 70 miles to the race distance. Without the detour, my time would have been 237 hours (i.e., 9 days, 21 hours). So I’m happy to mark the sub-10 barrier off my goal list even if it doesn’t look like that in the results.

It’s amazing how knowing what to expect makes so many things go smoother. Dealing with the heat was easier this year. Dealing with sleep was much easier. Nutrition was so much better thanks to Lauren Parrish and Brian Barnett. The things that were hard were things that we didn’t have to deal with as much in 2015 – headwinds and saddle sores.

Overall my moving average speed (15.2 mph) was about 1 mph slower than my moving average speed in 2015 (16.2 mph). That is a huge difference over the length of the race, but this was offset by the fact that I was off the bike for 25 hours less in 2017 than 2015, which netted me a race that was about 12 hours faster despite being over 70 miles longer. I haven’t tabulated all the sleep data yet, but I’m thinking total sleep was closer to 20 hours instead of 30 hours in 2015.

Highlights from the race included sprinting Svata Bozak (from the Czech Republic) and barely passing him less than one second from the summit marker of Wolf Creek Pass. Also, there was a section of Eastern Ohio, where the tailwinds really kicked up and I was super motivated to go flying through all the corn fields, and ended up ramping up the speed enough to launch over a set of railroad tracks without even really bunny hopping it. Other highlights included some amazing support from the crew with some fantastic appearances from the Flash (Lauren) and Dr. Fancy Pants (Stephen Peters) cheering me up in some really down times. Finishing riding on certain days and sleeping in a hotel even if it was only for an hour or so, was also a highlight based on how well the crew took care of me and got me down to sleep quickly.

Low points from the race included being so amazingly cold outside of Flagstaff, Arizona as well as sleep deprivation late in the race. Without a doubt, though, the two lowest points of the race were the headwinds in Kansas, and the headwinds for the last 100+ miles of the race. Another low point was a badly timed sleep that left me reeling and unable to really wake up on the bike for several hours afterwards losing a lot of ground to Thomas McKenna in eastern Ohio into West Virginia.

Many, many more details and photos will be coming soon in the next few days as I relive all the action of the race as best as I can remember it!!! In the meantime here’s a facebook live video Kristine and I did capturing some of the highlights of the race as we answered questions.

"You step onto the road, and if you don't keep your feet, there's no knowing where you might be swept off to." Bilbo Baggins